The new designs will put an end to inserting a USB cable the wrong way round
A new design for USB – a standardised connection for data transfers between electronic devices – has been shown off for the first time.

The new connector will be reversible, bringing an end to the everyday irritant of trying to force a USB cable in the wrong way.

The images were first published by technology news site The Verge.

The USB Implementers Forum anticipates the new designs will be finalised in July.

But rollout of new ports will take some time as manufacturers gradually incorporate them into their products. 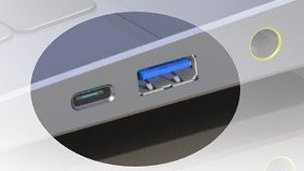 The new Type-C standard will be similar in size to the current MicroUSB connector, typically used for charging mobile phones and cameras.

The first USB cables were released in the mid-1990s and, until now, could only be plugged into a computer or other device one way round to ensure a data connection.

Other improvements to the new cable include: